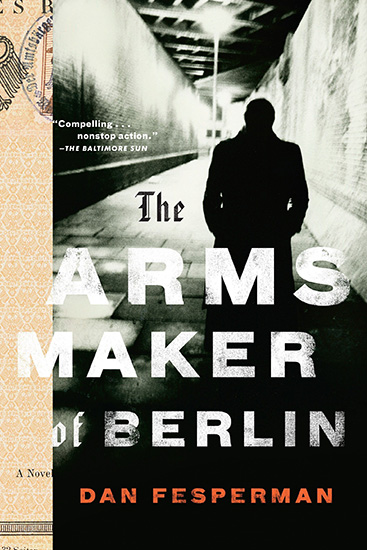 The Arms Maker of Berlin

Nat Turnbull, a history professor who specializes in the German resistance, is only mildly surprised when his estranged mentor, Gordon Wolfe, is arrested for possession of stolen World War II archives. But what’s in the archives is staggering: a spymaster’s trove missing since the end of the war, containing potentially explosive revelations.

Key documents are still missing, however, and Nat believes Gordon has hidden them. The FBI agrees, and when Gordon is then found dead in jail, the Bureau dispatches Nat to track down the material, which has also caught the interest of several dangerous competitors. Following a trail of cryptic clues left behind by Gordon, and assisted by an attractive German academic with questionable motives, Nat’s quest takes him to Bern and Berlin, where his path soon crosses that of Kurt Bauer, an aging German arms merchant still hoarding his own wartime secrets. As their tales—and Gordon’s—intersect across half a century, long-buried exploits of deceit, devotion, and doomed resistance begin working their way to the surface. As the stakes rise, so do the risks.

“A fine stand-alone thriller… readers who like a bit of history with their thrills will be thoroughly satisfied.”
—Publishers Weekly
“Taking place alternately in the present time as well as in the 1940s, the clues come steadily, but the solution is not apparent until the very end…. This one is definitely not your out-of-the-box spy caper, thus highly recommended.”
—Booklist, (starred review)
“(A) smoothly accelerating thriller… Fesperman is a skillful, unpretentious writer who deftly incorporates his extensive knowledge of the period into a plot that rarely flags or strains credulity.”
—The Boston Globe
“Smartly imagined and deftly drawn… You come away from a Fesperman novel not only abuzz with the exhilaration of the chase, but also aware that you’ve absorbed something of the complexity of the world’s conflicts.”
—The San Francisco Chronicle

“A worthy and ambitious tour of German history from 1941 to 2009, (a story) of blighted love affairs, misguided treachery and lifetimes of blackmail and intrigue… a good, intelligent book.”
—The Times of London

“Stylish, thoughtful and satisfying… Described by some critics as ‘the American le Carré’ Fesperman has built a considerable reputation over the past five years for his elegantly worked depictions of the shadowy world that lay behind America’s war on terror. But his new thriller steps into territory that le Carré once made his own: the legacy of Nazi Germany in post-war Europe.”
—The Daily Mail