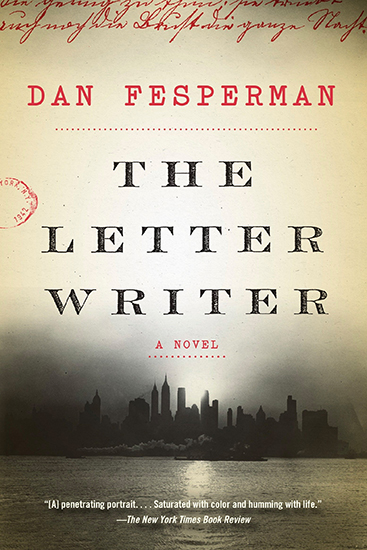 The first thing Woodrow Cain sees when he arrives by train in New York City on February 9, 1942, is smoke from an ocean liner in flames in the harbor. It’s the Normandie. Word on the street is that it was burned by German saboteurs. “Ten lousy minutes in New York and already his new life felt as full of loss and betrayal as the one he’d left behind.”

What Cain left behind in a small North Carolina town was a wife who’d left him, a daughter in the care of his sister, and a career as a police detective marred by questions surrounding his partner’s murder. Hoping for a fresh start in the NYPD, Cain soon meets up with a gnomish old fellow calling himself Danziger, who has the shabby appearance of a “crackpot,” but speaks five languages and has the erudition of a polished man of means. He is also the one person who can help Cain identify a body just found floating in the Hudson River. But who exactly is Danziger? He’s a writer of letters for illiterate immigrants on Manhattan’s Lower East Side—”a steadfast practitioner of concealing and forgetting” for his clients, and perhaps also for himself: he hints at a much more worldly past. Whoever he really is, he knows far more than the mere identity of the floating corpse, an immigrant who had gotten mixed up in shady activities in New York’s “Little Deutschland,’ where swastikas were proudly displayed just months before. Danziger also seems to know that the investigation will put Cain—and perhaps his daughter and the woman he’s fallen for—in harm’s way. The deeper Cain and Danziger dig, the nearer they come to the center of a citywide web of possibly traitorous corruption which threatens them both.

“[Fesperman] gives us a well-crafted novel steeped in the politics and street life of 1940s New York, and in The Letter Writer, he’s created a character who will stay with you long after the last shot is fired.”
—Kirkus Reviews

“The WWII alliance between the Mafia and the U.S. government has been explored in crime fiction before… but never in such compelling fashion as Fesperman does here…. What makes this novel shine is the way Fesperman combines it with the mobsters-as-patriots angle and with the rich character of the letter writer. A multifaceted mix of mystery and historical fiction.”
—Bill Ott, Booklist
“Intelligent… Fesperman shows a skilled hand at creating the detail of wartime New York—the vitality of the German Yorkville section, the hysteria following the bombing of the luxury liner the Normandie, the influence of mobster Meyer Lansky…. The likable and well-drawn [protagonist] will go over well with readers, especially those fond of historicals.”
—Publishers Weekly
“A well-executed period piece, with plenty of historical detail but no whiff of the lectern. A cracking good yarn, as they would have said back then, full of well-turned passages.”
—Salem Macknee, McClatchy Newspapers

“The Letter Writer is a unique blend of a scholarly sleuth teamed with a Sherlock Holmes-like chameleon in a time of history ripe for building stories of suspense around… The combination is pure chemistry, and pure entertainment.”
—Kate Ayers, Bookreporter.com