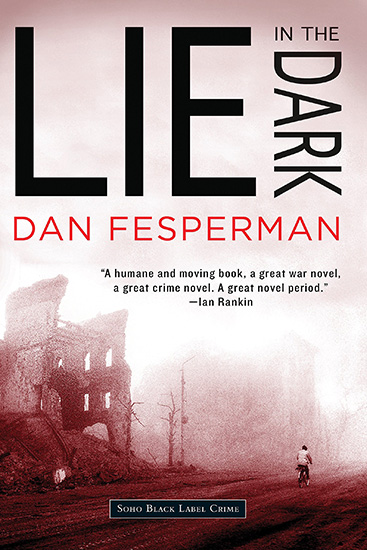 Lie in the Dark

Vlado Petric is a homicide investigator in war-battered Sarajevo, and he’s in a malaise. His wife and daughter have been in Berlin for two years. He has little heat or food. It’s been quiet at the bureau. Even the body he encounters in “sniper alley” on his way home from work one night seems little reason for pause, until he realizes that it is the body of Esmir Vitas, chief of the Interior Ministry’s special police, and that Vitas has been killed not by any sniper’s aim but by a bullet fired at almost point-blank range.

Dan Fesperman, a journalist who has reported from a number of war zones, has written a masterful thriller that travels through the brutal and almost surreal milieu of a wartime black market. Inspector Petric’s investigation eventually unearths “the transfer file,” the heart of an international ring reaching back to World War II, and whose commodity “in value, stature, and scope” goes unfathomably beyond anything he could possibly have imagined.

John Creasey Dagger for best first novel (1999)
“A mystery tinged by the politics of today… Brutally realistic.”
—U.S. News & World Report
“Add Vlado Petric to the list of great fictional detectives. And add Dan Fesperman to the limited list of authors to display superior talent in a first novel.”
—San Antonio Express-News
“This is a humane and moving book, a great war novel, a great crime novel. A great novel period.”
—Ian Rankin, author of The Hanging Garden
“A literate political thriller that will entertain… enlighten and fascinate.”
—The News & Observer (Raleigh)
“This is the story of the investigation of a murder, but it’s also a wonderful portrayal of a city at war and one of the best books I’ve read in a long time.”
—Sunday Telegraph (London)